Change management means, in a structured way, leading individuals, groups and organizations from the present situation to a desirable future position (Ekstam, 2005). According to him, it is important to understand that change is a psychological process. In the event of change, all concerned must submit a secure or known view of reality, which automatically results in an internal psychological resistance. The new requirements and the new situation lead to employees feeling insecure and afraid of the future. Only when employees notice that the new situation or pattern is working can they begin to feel secure and comfortable in the new reality (ibid.).

According to Rolandsson and Oudhuis (2009), trusting leadership is an important prerequisite for change. Gaining employees’ confidence is of the utmost importance if you are facing an important organizational change. The reason for focusing on issues of trust in leadership literature is the uncertainty that the change gives rise to. Changing the business is not easy and a change leader is needed who is aware of the complexity and can lead employees to accept the change. Confidence in management’s initiative can be built up through dialogue and responsiveness (Rolandsson & Oudhuis, 2009).

In addition, according to Ljungberg and Larsson (2001), management’s commitment and behavior play a crucial role when facing an organizational change / improvement. Furthermore, how the management acts has a strong impact on employees and what they will do in a change situation. Ljungberg and Larsson (2001) further argue that an attitude change is required to enable a change / improvement.

According to Sörqvist (2004), it is important to give all employees the same goal picture, a mental picture of what one wants to achieve. Such mental imagery then has a major impact on employees’ attitudes and views. A vision is an important tool in this context, as it provides an understanding of a specific change / improvement. Above all, it is the goal that must be clearly visible. It is even more important that the vision and goals for the actual implementation are communicated to the employees and a communication plan should also be drawn up (ibid.).

The most common traps of change among change managers according to Ekstam (2005) are the lack of patience, the lack of supportive vision and the lack of short-term success. Other reasons why so often resist the coming change are, according to Yukl (2010), the lack of confidence, the feeling that change is not necessary or possible, financial threats, high costs, fear of personal failure, fear of loss of status and / or power , threats to values, fear of disturbances, etc.

According to Ekstam (2005), each change starts with a mapping of what it looks like in its own operations at present. At the same time, a need for change is identified based on what you later create a clear change picture of what you want to achieve. According to Ekstam (2005), the change process begins with the management conveying the message and expressing a clear vision of what one wants to achieve for change in the business. It is necessary to have good arguments for the upcoming change in order to create employee engagement and participation. The next step in this process is to make the personal connection. The management’s role is to communicate what role each individual plays in the change to create a preparedness for the employees. The third step is to develop knowledge, skills and attitudes. Employees must get the knowledge they need to understand their new role in the business. They gain this knowledge through training and education. In the next step, you create participation by letting those involved in the decision-making process and influence the company’s future. In this way, participation and responsibility are created, and ultimately also better results. The fifth step is about clarifying the process and creating intermediate goals. Ekstam (2005) states that it is important to visualize the process so that employees have easier to see what has already been achieved and what is expected. You should also set interim goals for the employees’ skills development. The final step is to follow up, support and strengthen. In some way, one must be able to verify that the business is on the right track and this too should be communicated to the employees participating in the change if possible. If you find that the measures you have taken do not lead where you want adjustments in method or time must be made (ibid.).

According to Kotter (referenced in Magnusson and Olsson, 2009; Yukl, 2010; Kotter International), researchers at Harvard in the United States, there are eight stages of change (see Figure 1). 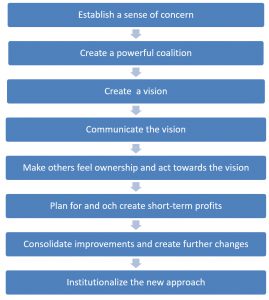 How do you and your organization work with change management?